on August 16, 2016
Our first week in the hospital was definitely busy. In addition to the actual surgeries, the team visited patients in the wards, and continued screening more people to add to the following week's schedule.

The surgical cases range in complexity from soft-tissue release procedures to ankle reconstructions. Likewise, the origin of their deformities varies. Many of our patients have clubfoot deformities while others have been in car accidents or have physical challenges related to cerebral palsy.

One of our patients, a nine-year-old boy with complications related to polio, is especially remarkable. And not because of his physical challenge. During the first day of screening, he sat patiently while people tended to those around him. I'd noticed him alone and expected a parent to return to his side so I could gather the intake information. After awhile, it was clear that he was alone. It turns out that he had traveled to the screening by himself, carrying his own x-rays and medical passport. I sat down with him and took down his information so the doctors could screen him for surgery. He was quiet but answered all the questions clearly. It turned out he'd been orphaned. Once we identified him for surgery, the hospital located an aunt who could consent for him and we completed the procedure. He's a pretty amazing young man. And now, once he's healed from his surgery, he should have one fewer challenge to handle going forward.

Some procedures take less than an hour, while others take much longer. In general, our patients will be unable to put weight on the affected leg to walk for at least four weeks.

Several patients have had bilateral procedures, which means even crutches aren't an option during the initial stages of recovery. For many, the recovery time is extended due to the complexity of the procedure and how fragile the foot or ankle is following the surgery. For example, a soft-tissue procedure to lengthen a tendon takes much less time to heal than an ankle reconstruction. For these reasons, several of our patients will spend much longer in the hospital given where they live may be hundreds of kilometers away from Windhoek.

We focus on those patients for whom we can improve their quality of life. It's especially rewarding when working with children because once they recover from the procedures, most can just be regular kids instead of kids hampered by foot and ankle problems. 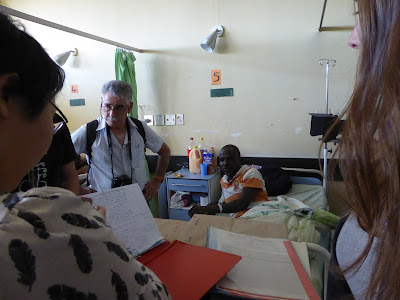