on January 09, 2018
Our final day at the hospital was another busy day in the operating rooms with 14 patients. Outside of the OR, we had to pack up our all supplies for the journey home and visit patients who had surgeries in the days prior.

There's always one particularly memorable case in each mission. Two years ago it was a little girl with tibial agenesis, this year it was a young man with bilateral macrodactyly. 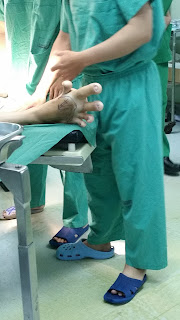 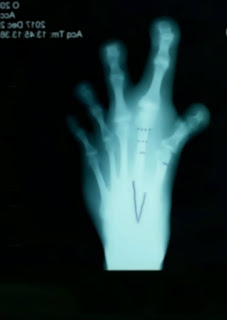 Macrodactyly is an uncommon condition where the patient has abnormally large fingers or toes due to overgrowth of the underlying bone and soft tissue. Like many of the deformities the team treats during missions, it's typically treated in infancy or early childhood in other parts of the world with greater access to specialized medical care. Our patient was a 27-year-old who hadn't previously had access to treatment. Having surgery was a tough decision for him. Although the deformity caused challenges for him, the prospect of a significant surgery was daunting. He eventually decided to go with the doctors' plans to remove the deformed toes.

In screening, we also see patients who are still dealing with physical trauma from the Vietnam war, often injuries from being shot. It's a sobering thought to know that although it was more than 40 years ago, people are still living with the scars -- both seen and unseen. Lack of access to early treatment and ongoing care continues the trauma long past the actual event.

Several of us also had a great experience interacting with a teenager who was tough as nails, except when it came to the idea of the IV needles. He was especially impressed by tattoos, which was a great way to distract him from thinking about the surgery. He and Flech -- the most tattooed of our team -- definitely had a connection.