on August 17, 2018
We started off the second week of surgery with a very aggressive schedule. We planned 13 cases and completed 10. One was canceled because the patient had a fever and another moved to Wednesday. Sadly, they had to cancel a procedure for a seven-year-old boy because we couldn’t get parental consent. His family is in the Okongo region, which is very far north near the Angolan border. His uncles had brought him to screening, but the hospital needs actual parental consent. It’s sometimes hard to explain to the families. Culturally, uncles are like fathers and aunts are like mothers. Legally, it’s just not the same.

Just to keep things hopping, we screened several more patients in between cases while the operating rooms were being turned over for the next surgeries. We also reviewed the x-rays and CT scans of patients we screened last week to make final decisions on whether they should receive surgery.

The team completed nine surgeries on Tuesday, our busiest day yet: 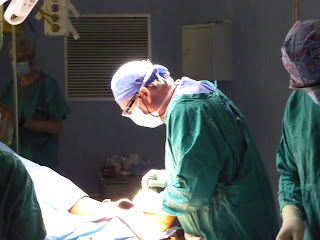 We’ve seen a lot of ankle fractures referred from the local orthopedic departments. The doctors here say they see a lot of trauma, largely from car accidents. Our team really specializes in deformities like clubfoot that are often not treated as quickly as trauma cases.

It was a long day, but very satisfying. We spent nearly 12 hours at the hospital, which meant the van was particularly quiet on the way home. One of the things I appreciate most about this group is that it really is a team. We eat breakfast together, work together, and usually eat dinner together. There's plenty of work, but plenty of good humor as well. While we're here, we're definitely family -- which makes being half a world away from my own family much easier.
2018 Namibia Medical Mission Windhoek Windhoek Central Hospital
Location: Windhoek, Namibia