on August 27, 2018
Reprinted from https://neweralive.na/posts/american-medical-team-concludes-mission,
August 20, 2018

WINDHOEK - The International Extremity Project medical team consisting of amongst others doctors and a nurse last week completed its mission to Namibia where they operated on 37 Namibian patients. 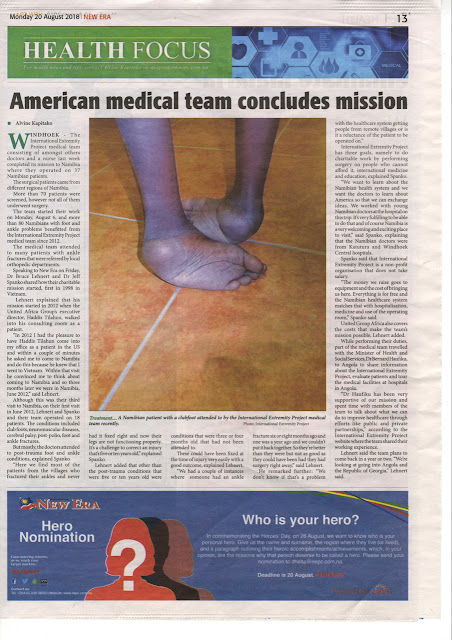 The surgical patients came from different regions of Namibia. More than 70 patients were screened, however not all of them underwent surgery. The team started their work on Monday, August 6, and more than 80 Namibians with foot and ankle problems benefitted from the International Extremity Project medical team since 2012.
The medical team attended to many patients with ankle fractures that were referred by local orthopedic departments.

Speaking to New Era on Friday, Dr Bruce Lehnert and Dr Jeff Spanko shared how their charitable mission started, first in 1998 in Vietnam.

Lehnert explained that his mission started in 2012 when the United Africa Group’s executive director, Haddis Tilahun, walked into his consulting room as a patient.

“In 2012 I had the pleasure to have Haddis Tilahun come into my office as a patient in the US and within a couple of minutes he asked me to come to Namibia and do this because he knew that I went to Vietnam. Within that visit he convinced me to think about coming to Namibia and so three months later we were in Namibia, June 2012,” said Lehnert.

Although this was their third visit to Namibia, on their first visit in June 2012, Lehnert and Spanko and their team operated on 18 patients. The conditions included club foots, neuromuscular diseases, cerebral palsy, post-polio, foot and ankle fractures.

But mostly, the doctors attended to post-trauma foot and ankle conditions, explained Spanko.
“Here we find most of the patients from the villages who fractured their ankles and never had it fixed right and now their legs are not functioning properly. It’s a challenge to correct an injury that’s five or ten years old,” explained Spanko.

Lehnert added that other than the post-trauma conditions that were five or ten years old were conditions that were three or four months old that had not been attended to.
These could have been fixed at the time of injury very easily with a good outcome, explained Lehnert.

“We had a couple of instances where someone had an ankle fracture six or eight months ago and one was a year ago and we couldn’t put it back together. So they’re better than they were but not as good as they could have been had they had surgery right away,” said Lehnert.

He remarked further: “We don’t know if that’s a problem with the healthcare system getting people from remote villages or is it a reluctance of the patient to be operated on.”

International Extremity Project has three goals, namely to do charitable work by performing surgery on people who cannot afford it, international medicine and education, explained Spanko.

“We want to learn about the Namibian health system and we want the doctors to learn about America so that we can exchange ideas. We worked with young Namibian doctors at the hospital on this trip. It’s very fulfilling to be able to do that and of course Namibia is a very welcoming and exciting place to visit,” said Spanko, explaining that the Namibian doctors were from Katutura and Windhoek Central hospitals.

Spanko said that International Extremity Project is a non-profit organisation that does not take salary.

“The money we raise goes to equipment and the cost of bringing us here. Everything is for free and the Namibian healthcare system matches that with hospitalisation, medicine and use of the operating room,” Spanko said.

United Group Africa also covers the costs that make the team’s mission possible, Lehnert added.
While performing their duties, part of the medical team travelled with the Minister of Health and Social Services, Dr Bernard Haufiku, to Angola to share information about the International Extremity Project, evaluate patients and tour the medical facilities at hospitals in Angola.

“Dr Haufiku has been very supportive of our mission and spent time with members of the team to talk about what we can do to improve healthcare through efforts like public and private partnerships,” according to the International Extremity Project website where the team shared their working experience.

Lehnert said the team plans to come back in a year or two. “We’re looking at going into Angola and the Republic of Georgia,” Lehnert said.
2018 Namibia Bruce Lehnert Jeffrey Spanko Namibia Namibian Ministry of Health United Africa Group