on January 07, 2020
Tuesday was another busy day in the operating rooms with several big cases. While some of the soft-tissue cases can take less than 30 minutes, then bony cases take between an hour and two hours complete.

The complex bony cases require more equipment, specifically power instruments. Because we bring all our own instruments, we have to create the schedule to allow time for the hospital to sterilize the power instruments between bony procedures. 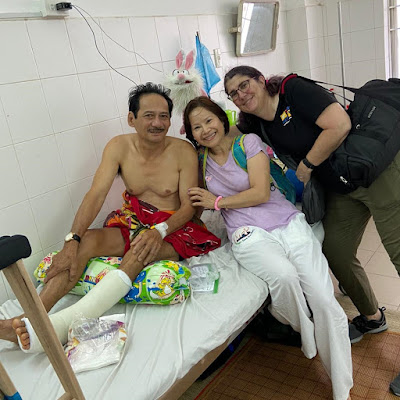 Several of us went up to the patient rooms after lunch to visit patients. The nurses and translators reviewed post-operative instructions with Monday's surgical patients and their families. Others on the team provided comfort care, including distributing toys, providing essential oils with instructions, and decorating the casts of the younger patients. It gets a bit chaotic -- the patients are roomed 3 or 4 to a room and an entourage of people, casts, and crutches manages to quickly fill any remaining space in the patients' rooms.

The day's last patient was a 13-year-old boy. We try to schedule the younger patients earlier in the day because it's hardest for them to tolerate the pre-surgery fasting and just the general stress of being away from their families prior to the procedure. Even with a pre-operative sedative, this young man was nervous and the hallway was not a calming place. 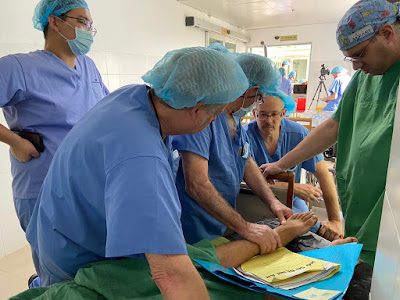 Many of our patients wait on gurneys in the hallway outside of the operating rooms. There's a constant flow of people moving from room to room, taking equipment or supplies to one of the operating rooms, or just getting from here to there. Add to that equation a mix of voices speaking multiple languages and it can be overwhelming. The doctors got together to discuss his case, so he had a group of strangers surrounding his ankle speaking in a language he didn't understand -- not that the medical terms are simple to understand even in your native language.

Thankfully, we have enough people here that he had someone to sit with him while he waited and comfort him during the actual surgery. Other than the small children, most of our patients are awake during their procedures, so they can hear what's happening even if they cannot feel it. This young man was full of questions: Would he be able to run when it healed? How much time would he be away from school and his friends? What would he do during Tet (the massive new year celebration)? The combined efforts of Mai, one of our translators, and Devin, our aromatherapist, actually had him singing at one point while the surgeons did their work. He was full of questions The human part of the equation is an important part of helping the patients while we're here. 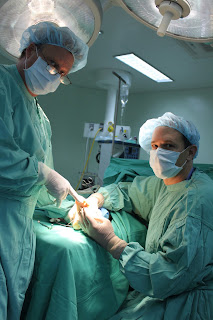 Preparing for Can Tho: Jeffrey Spanko, DPM

Drs Spanko and Lehnert in Can Tho, November 2010 It is with great excitement that the IEP medical team enters the final week before our departure for Vietnam on December 29. My name is Jeffrey Spanko, DPM, and this will be my seventh medical mission to Can Tho in the Mekong Delta. I am a team surgeon on our medical missions, as well a co-founder and director of the International Extremity Project. I have known Dr. Lehnert since he was a medical resident in the early 1990s. We have since become close professional and personal friends. It was a defining moment for me when Dr. Lehnert invited me to join him for my first medical mission to Vietnam in 1999. Together, we formed Mission Peace, our first non-profit medical team. In 2009, we reorganized our group and became International Extremity Project (IEP). The November 2010 mission was our first as IEP (posts start here ). Earlier this year, in June, we provided care in Namibia (posts start here ) and are now returning 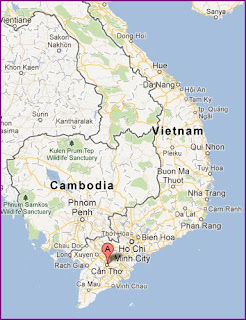 It's official: Planning for the next International Extremity Project (IEP) medical mission to Can Tho, Vietnam, has begun!  The team has been working with Can Tho General Hospital and Can Tho University Hospital to organize patient evaluations and surgeries in January 2013. As currently scheduled, the mission team will arrive in Saigon on December 30th, then travel to Can Tho to work until the 10th of January. For an idea of what will happen during the mission, check out the posts from the November 2010 trip .

Promote Your Page Too