on December 31, 2012
We're halfway through our first day of work at the hospital. After a good breakfast at our hotel, we traveled through the city to Can Tho General Hospital in four taxis. The local doctors greeted us at the cars and showed us to the exam rooms and waiting area, where patients and their families were already waiting for us. 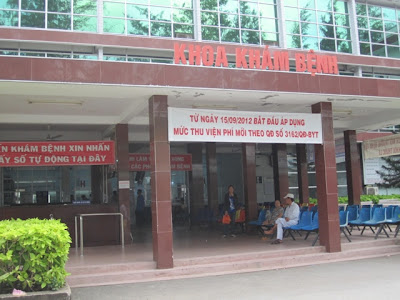 The hospital has arranged for these specific patients to be seen by the IEP doctors, so most have been pre-screened and are likely candidates for surgery or PT consultations. The patients come from all different areas in the Mekong Delta as Can Tho is the second-largest city in South Vietnam. Some of the areas from which patients travel are very rural, making it even more difficult for people with lower-extremity impairments to function in their communities.

We quickly set up and started doing the patient intake.

The hospital's nurses did an initial intake with each patient scheduled for today's screening, then brought them to our intake team. Our interpreter Hoa helped us gather each patient's name, birthdate, contact information, and reason for being seen. Once we documented the basic information and created a form for the doctors to use to take notes and write their recommendations, we took photos and video of the patients standing and walking to document their current condition.


Once we completed the intake, the doctors evaluated the patients. Some will be listed for surgery, some for physical therapy, and others -- sadly, we won't be able to help. Thankfully, in a few cases with children, their parents needed little more than reassurance from the doctors that their children will develop normally.

Today's evaluations involved 42 patients, the youngest was three months old and the eldest 55. Many have similar "clubfoot" deformities in which their feet turn in and they walk on the sides of their feet. Others can only walk on their toes because their heels don't touch the ground. Several patients have difficulties as a result of polio. Although polio has been largely eradicated and is rare in countries like the United States, the Salk vaccine is still not given globally. 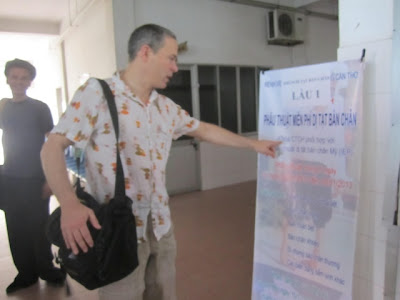 Several of today's patients were return patients from the 2010 mission. Of those, some were there so the doctors could evaluate the results from their surgeries in 2010. Others will have additional surgeries -- for instance, one woman had surgery on her left foot in 2010 and will now have surgery to correct her right foot.

Of the patients evaluated today, 16 have been selected for surgery. Another group is being referred for physical therapy, some for bracing of their feet or ankles to provide better support for walking.

Tomorrow is the first of the new year and a holiday, so a day off for all of us. We'll have an official welcome meeting with the hospital executives on Wednesday, followed by evaluation of another 30 or so patients.

Until then, it's time for a bit of exploring the area around the hotel before we have a team dinner to celebrate New Year's Eve.
2013 Vietnam Can Tho Central General Hospital clubfoot equino cavus Kim Austin Medical Mission physical therapy podiatry polio previous patient screenings Vietnam