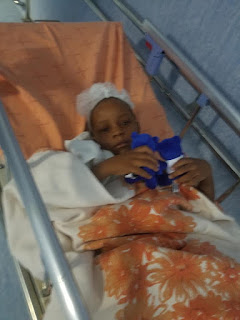 We saved Day 1’s expected chaos for Day 2. The changes we made to the surgical schedule on Tuesday afternoon didn’t quite make it all the way through the system, so we had a few surprises this morning. The theme of flexibility came up again as we shifted patients between operating rooms and doctors to account for the schedule changes.

The person who had the most trouble with the schedule changes was a 5-year-old boy. Because patients cannot eat for several hours before surgery, we like to put the youngest children earliest in the day. The shift in the schedule put him a bit later and he needed some extra mom time – and two teddy bears – to get through the wait. The bears definitely helped comfort him, but with the language barrier, I was unable to reassure him with any kind words. It’s one of the times when I feel most helpless.

Today was also planned as a shorter surgical day because four of the doctors are lecturing at the medical school in the afternoon. As it turned out, that leisurely couple of hours between the final surgery and the lectures actually turned into two of the doctors going directly from surgery to deliver the first two lectures, and the other two doing the same as soon as they finished a final case.

We originally had two more cases on the schedule, but the hospital could not locate one and mistakenly sent another home because they thought the surgery was on a different day. We also have the challenge of patients staying in a different hospital. Many of the patients are staying at Katatura State Hospital, transported to Windhoek Central for surgery, then transported back to the patient wards at Katatura.

We completed 6 cases on Wednesday, 4 kids and 2 adults:
The tendon cases are typically the simplest. Some of the actual procedures take only 15 minutes but provide great benefit to the patient. For example, before a tendon-lengthening procedure, the patients cannot put their heels on the ground because the tendon isn’t long enough. It’s especially difficult for the patient when they have the condition on only one leg because it causes such an uneven gait, which can lead to other physical challenges. 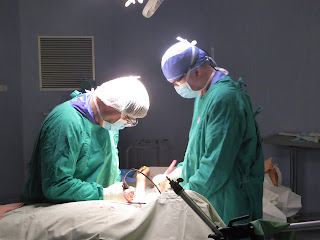 The surgeons make very minor incisions on multiple places on the tendon, then position the foot at 90 degrees and put it in a cast. Once healed, the patient has the range of motion needed to put the heel on the ground to walk normally. It seems amazing that something so surgically simple can create such a difference for the patients.


The bony cases are more invasive and complex, so they require more time -- both for the procedures and healing. Today’s morning cases took much longer than expected. Even with x-rays before the surgery, things can look different once the doctors are actually in surgery.

The first case of the day, a bi-lateral clubfoot repair, took much longer than usual. This boy caught the attention of one of the local surgeons while he was waiting for screening. It's cold this time of year, particularly in the more rural areas where housing is not as sophisticated. Because of his clubfoot deformity, he was unable to wear shoes and was barefoot in the cold. His uncle brought him for screening from several hundred kilometers away in the north of Namibia. The hospital had to get special permission to allow his mother to sign a consent in another hospital closer to their home and send it to us. They were both so patient and hopeful during the screening process that I'm glad we were able to treat him. The local surgeon is excited to buy him his first pair of shoes.

The lectures at University of Namibia Medical School went well although they were not well attended. Our team presented four lectures, each of which generated good questions and discussion from the Namibian doctors – and each other.

It was a very busy day, but another satisfying day. There’s definitely a feeling of accomplishment paired with exhaustion during the van ride back to the hotel.

Thanks to all for following our progress and sending kind words of support through Facebook. Knowing we have such great support helps us get through some tough moments while we’re here.